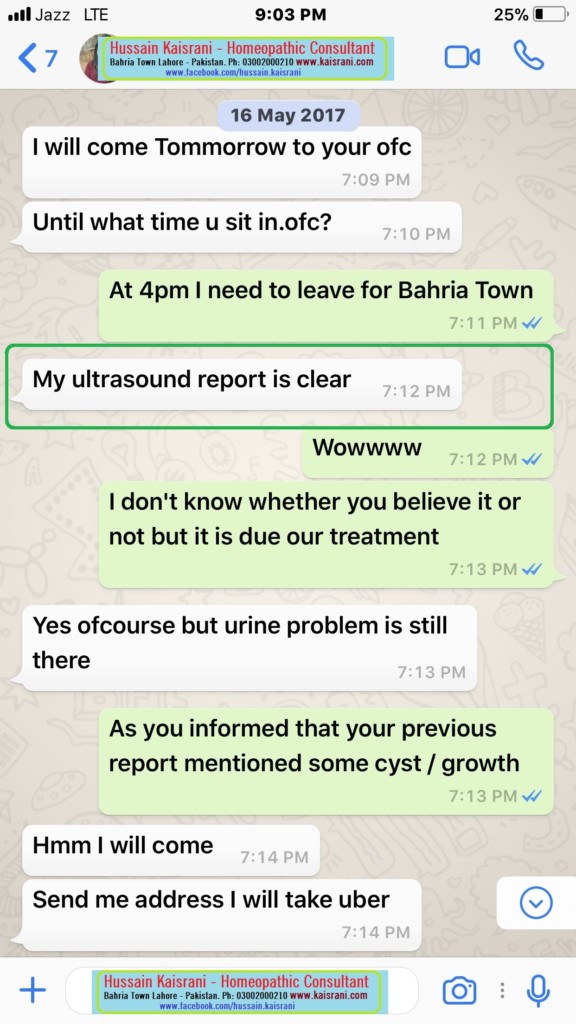 Client KZ, age 30, resident of Copenhagen (Denmark), Married with 2 kids contacted on August 20, 2016 through phone to discuss multiple ongoing problems regarding her health which were impairing the quality of her life and were difficult to deal with. Most prominently, she was a diagnosed case of PCOS (polycystic ovaries syndrome), PCOD and Ovarian Cysts. Along with that, she was also having issues in several aspects of health and wellness.

4 Days later, she reported that her pains are 40% better and other issues are also settling down gradually. 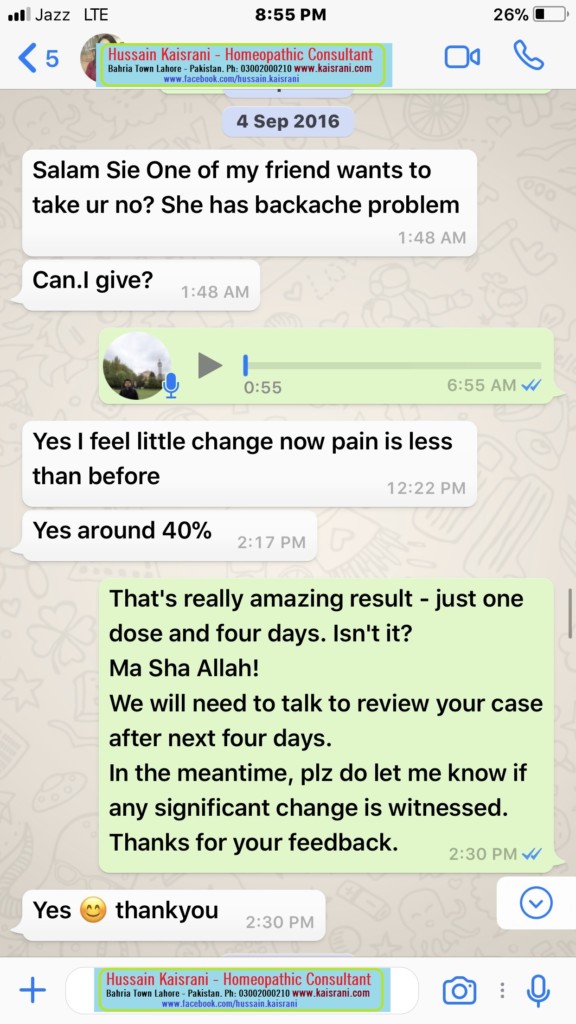 Pains originated at multiple sites following the course of treatment. They were addressed and settled down subsequently. Other issues in mental and emotional sphere became fine to the level where they stopped hindering usual routine activities. According to patient, she started witnessing a positive change in her concentration (She is a PhD scholar), mood, remains fresh and active through the day. Overall quality of life improved significantly and remarkably. She became almost symptom free after two and half month. 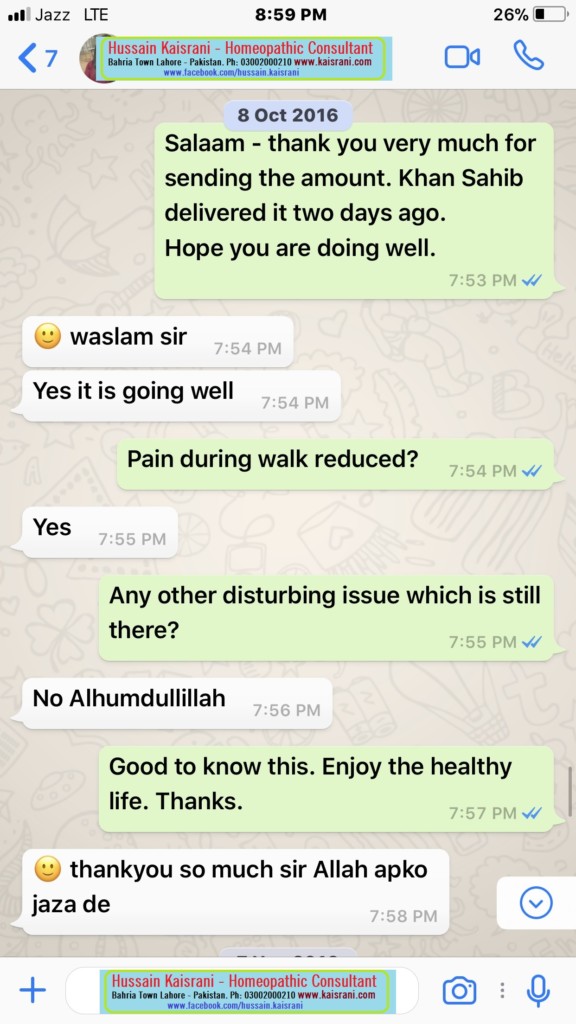 Even though she became symptom free, she was followed at intervals to inquire about any residual issues or anything eventful regarding health that still needed to be addressed. Given the progress of her case, she was expected to get clear of any cysts/growth in an estimated duration of 4 months time. Ultrasound was requested, but she was unable to get an appointment due to long waiting lists in Denmark. It kept on getting delayed untill she came to Pakistan and finally got her scan done. The persistent follow up turned out to be amazingly fruitful when on 16th May 2017 she reported that her ULTRASOUND REPORT IS CLEAR of all polycysts, fibroid / growth.
Finally, she was successfully cured for PCOS.

A NEW DEVELOPMENT
On August 11, 2017, she contacted to consult about sudden onset of extremely severe and debilitating pain localized to one side of face. It was provisionally diagnosed as clinical condition called “Trigeminal Nueralgia” by her physician in Denmark. She was scheduled for MRI (diagnostic imaging) but the due date was far away and she was prescribed pain killers for temporary pain relief. (Here it is noteworthy that she was counselled by her local physicians that it might be a neuropathic pain for which no definitive treatment is available in medical sciences. She might have to take pain killers and tranquillizers for the rest of her life with last resort being surgical management).
On telephonic interview and case taking, she was found extremely upset and stressed about her condition. She was also uncertain and insecure about long term management of her issue. The main issue was ambiguity of problem, panic related to non availability of urgent medical services and above all inability to reach a definitive  diagnosis by physicians at that time. Following features and associations of pain were narrated by her.
HISTORY OF PAIN
Initially, the pain was gradual in onset and its duration dated back almost one and half month ago, but at that time it was bearable. It was felt on and off, was episodic in nature, came in forms of transient, short lived attacks multiple times a day. Pain was occurring in bouts lasting a few seconds to several minutes. On multiple occasions it was felt as shooting pain severe like an electric shock. Two weeks before consultancy the pain increased in intensity, frequency and severity. It was localized to whole one side of face and adjacent areas (cheeks, jaw, teeth, gums, lip and one side of forehead) for which high dose pain killers were prescribed for relief and supportive management. Two days before consultation, it evolved into constant aching burning pain which was exacerbated by spasms like pain at short intervals. She was in total misery, unable to carry out normal activities of routine. She was also handicapped in performance of activities as simple as chewing, speaking, touching face, brushing hair etc. The condition was even more stressful and helpless owing to non-availability of urgent medical services due to barrier of health care provision in system of her country.
PRESCRIPTION OF REMEDY IN LIGHT OF PAST MEDICAL HISTORY
Owing to her intolerable pain, anxiety associated with illness and sudden unexpected problem she was unable to give a clear history. So, the clinical picture was not completely clear. Since she was an old client, her current problem was carefully related to her past medical history. Thuja Occidentalis produced wonderful results which is one of the most prominent remedy of Sycosis Miasm.
In homeopathic system of treatment a miasmatic or constitutional remedy is chosen after taking into account all aspects and basic essence of patient. If chosen accurately, after considering subtle details of case in minutest forms, the constitutional or Miasmatic remedy is expected to open up the case when the case is not clear, whatever is the cause of ambiguity.
Due to detailed history taking and record keeping it became easier to correlate her current problem to her past history. After thorough telephonic  interview, her miasmastic remedy was prescribed hoping that even if doesn’t address the issue, it will open up the case and will guide for further. Based on this conviction “Medorrhinum 1M” was prescribed.
FOLLOW UP
Active follow up was done for next two days through phone calls and Whatsapp. Two days later she reported that after taking medicine her generalized pain on whole one side of face became localized and could be pointed as “TOOTHACHE”. Rest of one side of face almost became pain free. The ambiguity was resolved and toothache associated with headache was left to be treated. The generalized distribution of pain on whole one side of face which was masking the underlying toothache and making diagnosis difficult finally diminished.
She contacted her dentist who revealed that it was an infected wisdom tooth which was causing trouble but was unnoticeable due to pain in all adjacent areas. As soon as the root cause of pain was addressed by extraction of wisdom tooth, the spasmodic pain on side of face was settled.
Even though her problem settled, she was kept under observation for any expected relapse of pain but she remained symptom free 3 months following the resolution of pain and is successfully symptom free till date. 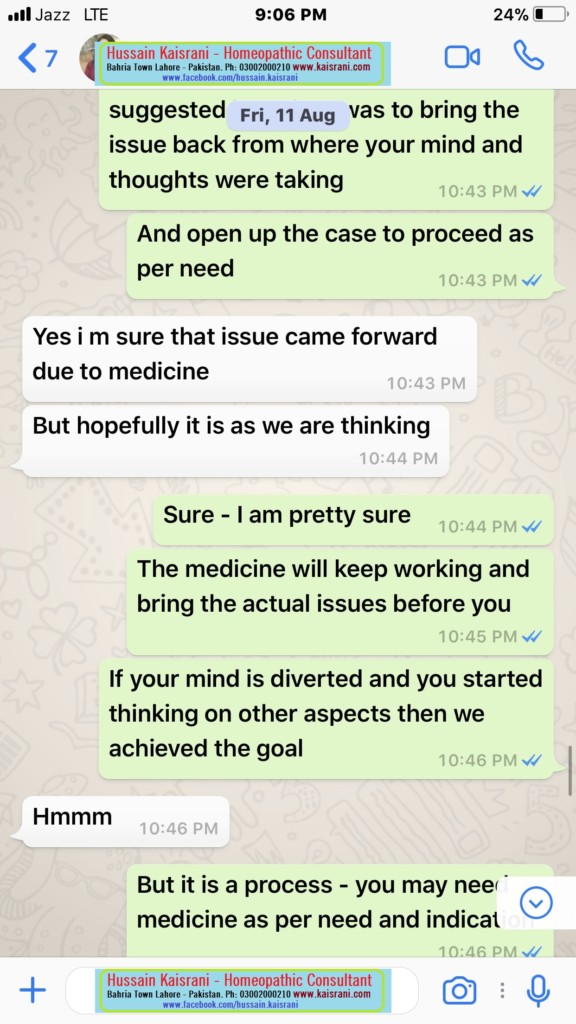 Helping to earn Double and enjoy the life better – A feedback

From Stuck and Lost Life to Flexible Life – A feedback