In an acute crisis, it is very difficult to differentiate between the anxiety remedies, it is important to find the “color” of the remedy in order to differentiate. The first question should be to ascertain how strong and how frequent the anxiety attacks are.

The most commonly indicated Homeopathic remedies which are often called for in treating these maladies are as follows:

Aconite
This remedy is chiefly useful in acute cases where disease has been caused by over heating or some violent emotional disturbance as after a great fright, joy or anger and with the mental we find an exalted condition of the general circulation. Almost certainly this remedy should never be given in cases where the sickness or suffering is borne with calmness and patience on the contrary, if Aconite is to be even thought of, we will find mental uneasiness, worry, or fear, accompanying the most vital ailment. The more thoroughly this state of mind exists, the more surely Aconite will be indicated. There is great and great fear, accompanying the most trivial ailment.

The more thoroughly this state of mind exists, the more surely Aconite will be indicated, there is great and uncontrollable anguish, the more surely Aconite will be indicated. There is great and great fear to go out of the house, of darkness, of a crowd, to cross the street, of approaching death and being alone, predicts the day, even the hour of his death, confusion of mind, weakness of memory, unsteadiness of ideas and disinclination for mental labor, variable humor at one time gay at another sad, sleeplessness or sleep disturbed by unpleasant dream. The anxiety attacks are worse at twilight. The attacks are not frequent but come suddenly and strongly with an overwhelming panic, palpitations and flushes of heat like a storm that come from inside with the feeling that he is about to die. The anxiety is like an earthquake erupting from inside, there may even be a delusion that the ceiling is moving up and down as in earthquake. The fright on the face is terrible to see.

There may have been a causative factor (e.g., a frightening experience, earthquake etc.) the panic attacks are very impressive, with the feeling of imminent death. There is a great fear of closed places and crowds and panic attacks (like Argentum Nitricum ). An aconite patient will not be found any where near demonstrations.

There is a fitful mood changing from excessive physical unrest. Depressed but compare one thing to another, now full of mirth actively careless of the future; intense cerebral and in a few moments disposed to congestion with a face flushed to a purple hue; weeping and a great mental anxiety and hot or it is cold with a pale bluish cast; is fearful of the future. Terribly dry hot mouth which feels scalded apprehensive of approaching death, face is flushed bright red or is pale with moderate congestion, thirst is moderate, nausea, retches and vomits profusely, muscles relaxed, has muscular twitching, restless, constantly changes his position, great thirst and gulps water eagerly.

Arsenicum Album
It is one of our most valued remedies and is especially indicated where the mental condition has been produced by causes which have greatly exhausted and debilitated the patient’s general condition, as from anxiety overwork, loss of sleep and a diseased condition of the mucous membrane generally and particularly of the stomach, thus preventing the proper digestion and assimilation of food.

The mental symptoms show in the beginning, anxious restlessness and from this a continuation towards delirium and even insanity, with all that it involves, he thinks he must die, even the patient expresses to the physician that there is no use of your coming and it is useless to take the medicine, I am going to die. Excessive anguish with irresistible desire to commit suicide. We should not forget this remedy.

Kali Arsenicum
This anxiety revolves around the heart, the patient may present with a slight functional problem (arrhythmia ) there is often a sense of loss I am finished , I am dying, this is similar to Arsenicum but more malignant. It can look like Arsenicum but with more frequent and intense panics. He does not need some one around like Arsenicum, instead he prefers to be alone, in a deep crisis he may telephone some one just to hear a voice and to know he is still alive. He won’t tell you out right about his anxiety.

Another equally characteristic state of mind is changeable mood. No remedy can equal Ignatia for this.

Natrum Muriaticum
It is one of our best remedies in various mental disorders and is often required for the chronic effects on mind when Ignatia apparently well indicated but fails to affect a complete cure. Natrum Mur is a chronic of and complementary to Ignatia in these cases.

There is a tremendous underlying anxiety about health (i.e., that he will have a stroke or be left invalid). This anxiety is not openly expressed, but he becomes persistent (always wanting his blood pressure checked “are you sure it’s normal? It is used to be). He will not voice his anxiety for fear of ridicule, he becomes hypochondriacal, always telephoning the doctor, but never reassured.

Phosphorous
These are nice people to see during their anxiety attacks! The attack is not so intense but it is accompanied by a fear of death or an incurable disease. The anxiety subsides rapidly with talking, she is convinced about your skills and gives you her trust, she stays loyal and does not go off to other practitioners, she talks about her friends who are not well and about what you can do to help etc. (Arsenicum patients will only talk about themselves).

Nitric Acid
There is a constant anxiety which is parallel only to Agaricus. The anxiety is associated with a fear that some terrible disease is developing. He won’t voice his fear outright but will ask for tests every 3 months and he will frequently change doctors to compare opinions, he finds lots of little things to complain about and no matter what you say, he still believes it’s cancer, these are the nagging and complaining patients that eventually get on your nerves.

Gelsemium Sempervirens
It is one of the favorite remedies and it occupies a place between aconite and Belladonna. It has cataleptic immobility with dilated pupils, closed eyes, but conscious, desires to be alone. Depression of spirits anxiety or solicitude about the present mental exertions cause a sense of hopelessness from brain weakness, inability to attend to anything requiring thought; attacks brought on from bad news. Generally a feeling of fullness in the head, throbbing carotids and melancholic stages and is a valuable remedy.

Digitalis Purpura
This drug although little known as a remedy in mental disorders, is in reality of the greatest importance, it’s chief indication is a slow pulse, whenever a case is found of mental disease of whatever form, presenting this symptom attended by a general appearance of exhaustion and debility a prompt and satisfactory improvement is sure to follow the exhibition of digitalis.

Great anxiety, depression and dread of the future with sadness and weeping, worse about 6 pm and is aggravated by music morose, irritable and gloomy, weakness of memory and mind dull, stupid and confused.

Lachesis Trigono Cephaliscephalis
Lachesis although not lost frequently demanded as many other remedies, is at times useful in melancholic, hysterical females near the climacteric period or in mania attended by excessive talkativeness. It has depression, with a tendency to look constantly on the dark side, nightly fear of disease, death, robbers, mistrust and suspicion with fear of being poisoned; peevish, irritable and quarrelsome with a mental activity with excessive loquacity, wandering constantly from one subject to another, memory weak, confused and difficulty in listening to others; restless sleep with aggravation of symptoms on awaking.

Anacardim Orientale
This is a remedy, which although not frequently called for, is very valuable in some cases. There are but few remedies in the entire Materia Medica having such great weakness of or impaired memory, it often cures the patient of all other troubles; hypocondriasis; feels as though she has two wills, one commanding to do what the other forbids, imagines she hears voices of persons from far away, unsociability, aversion to society; at times almost a demented condition very irritable, easily offended, abusive, passionate and contradictory, does all sorts of foolish things in a clumsy way, almost as if under the influence of liquor.

Aurum Metallicum
This remedy is best suited to male subjects, especially such as have a loathing of life or a suicidal tendency, they are melancholic, fearful, taciturn and sullen and their fear also embraces a religious melancholy with vertigo, anaemia and vascular and nervous depression. It is found very useful in cases of suicidal melancholy, in connection with the climacteric, especially when there is great dislike to seeing man and desire to be alone; also great irritability all the symptoms are at the full of the moon.

Aurum has the following characterstic, disgust of life, suicidal tendency, melancholy, imagines he is unfit for the world and longs for death which he contemplates with delight; great anguish mania prays all the time; loss of confidence in oneself.

Staphysagria
This remedy according to Berjeau, may be employed when there is hypochondriasis resulting from long continued masturbation with great taciturnity, constant uneasiness as to the state of oneself, anxious, imagination, imaginary fears, queer notions, that expose the patient to suspicion of being thought crazy; when the memory is weak and confused and there is giddiness and sleepiness, the eyes are deep, sunken, red and lusterless. There is continued loss of prostatic fluid and the sexual desire is impaired; when mind has been dwelling too much on sexual subjects, the penis is relaxed with dull and contusive pain in the testicles. Dr. Hart says this remedy takes high rank in all cases of hypocondriasis attended with seminal emissions. Weakness of the lower extremities and great prostration of mind and body; the result of having lived a disordered life.

Sepia
The patient is nervous, very irritable; indifferent towards those she loves best; sensitive to the least noise, sadness, worrying about her health and the future, with frequent attacks of weeping < in the evening and in the open air; fits of involuntary laughter or weeping, indisposition for mental work, with weak memory and difficulty in expressing her ideas. Restless, sleep disturbed by anxious dreams, awaking in a fright.

Sepia and Lilium Tig, find an important place in the treatment of depressed and irritable females. The troubles of such cases, originate largely in the mal-performance of duty on the part of the generative organs. Both of them are full of apprehensions and manifest much anxiety for their own welfare. 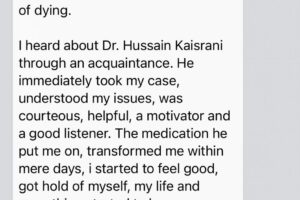