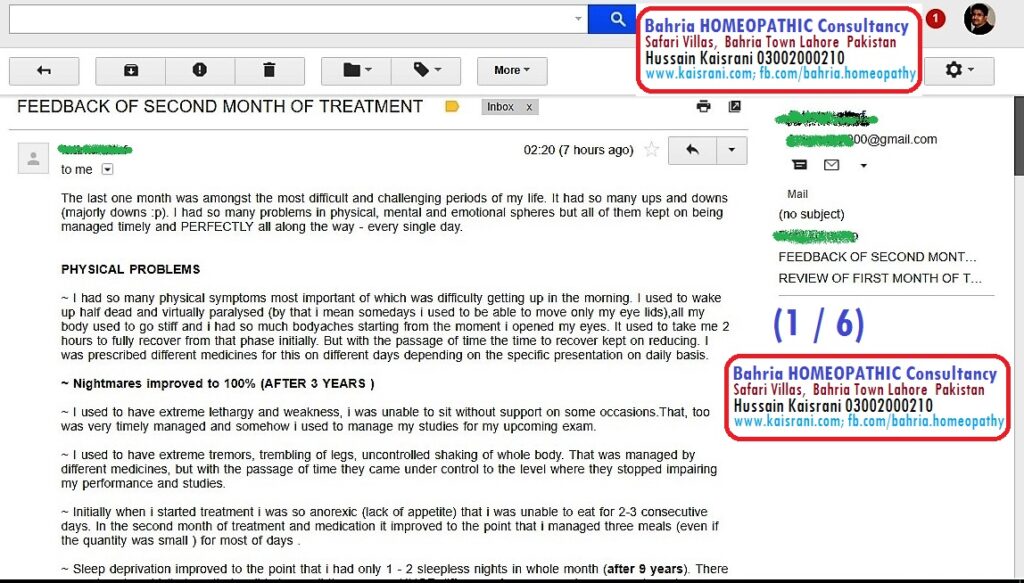 The last one month was amongst the most difficult and challenging periods of my life. It had so many ups and downs (majorly downs :p). I had so many problems in physical, mental and emotional spheres but all of them kept on being managed timely and PERFECTLY all along the way – every single day.

I had so many physical symptoms most important of which was difficulty getting up in the morning. I used to wake up half dead and virtually paralysed (by that i mean some days i used to be able to move only my eye lids), all my body used to go stiff and i had so much bodyaches starting from the moment i opened my eyes. It used to take me 2 hours to fully recover from that phase initially. But with the passage of time the time to recover kept on reducing. I was prescribed different medicines for this on different days depending on the specific presentation on daily basis.

I used to have extreme lethargy and weakness, i was unable to sit without support on some occasions. That, too was very timely managed and somehow i used to manage my studies for my upcoming exam.

I used to have extreme tremors, trembling of legs, uncontrolled shaking of whole body. That was managed by different medicines, but with the passage of time they came under control to the level where they stopped impairing my performance and studies.

Initially when i started treatment i was so anorexic (lack of appetite) that i was unable to eat for 2-3 consecutive days. In the second month of treatment and medication it improved to the point that i managed three meals (even if the quantity was small) for most of days.

Sleep deprivation improved to the point that i had only 1 – 2 sleepless nights in whole month (after 9 years). There were days i couldn’t sleep that well but overall there was a HUGE difference from my previous messed up sleep cycles.

I faced headaches and strain at the start of month which IMPROVED TO ALMOST 100% in a matter of few days (or it reduced to the level where it didn’t impair any of my routines).

Compared to first month of treatment VOMITING WAS 100% gone. I didn’t have a single episode of vomiting in this last month. (on and off mild occasional nausea but overall not bothersome).

As for my physical symptoms, everything was very sensibly and timely and accurately managed with great concern and keeping in consideration that fact that i don’t have much time owing to my upcoming exam. I am highly obliged for this. 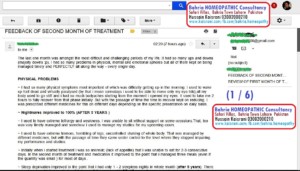 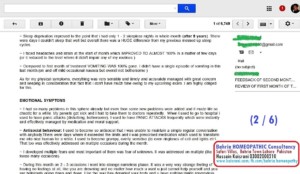 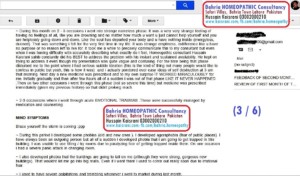 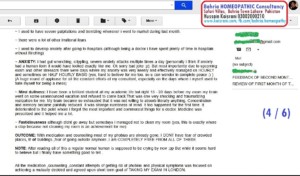 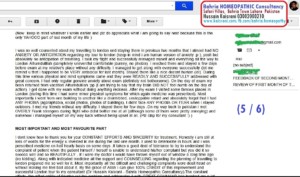 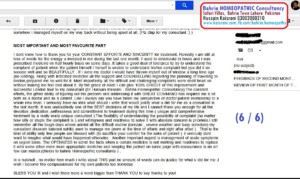 Brace yourself the storm is coming :ppp

During this period i developed some phobias (old and new ones ). I developed agoraphobia (fear of public places). I have always been an outgoing person but all of a sudden i developed phobia that i am going to get trapped in this building. I was unable to use fitting / try rooms due to paralyzing fear of getting trapped inside them. On one occasion i had a severe panic attack in changing room.

I also developed phobia that the buildings are going to fall on me (although they were strong, gorgeous new buildings). That wouldnt let me go into big malls. Even if i went there i used to come out really soon due to irrational fear.

I used to have severe palpitations and trembling whenever i went to market during last month.

There were a lot of other irrational fears

ANXIETY: i had gut wrenching, crippling, severe anxiety attacks multiple times a day (personally i think if anxiety had a human form it would have looked exactly like me. Ok sorry bad joke :p). But most importantly due to upcoming exam and other stressors there were days where my anxiety was very keenly and effectively managed on HOURLY and sometimes on HALF HOURLY BASIS (yes, hard to believe for me too. so u can wonder in complete peace) (A huge round of applause for all the constant efforts of my consultant, especially on the days where i myself used to hate myself for being a mess)

Mind dullness: I have been a brilliant student all my academic life but right 15 – 20 days before my exam my brain went on some unannounced vacation and refused to come back. That was one very shocking and traumatizing realization for me. My brain became so exhausted that it was not willing to absorb literally anything. Concentration and memory became painfully reduced. It was strange numbness of mind. It too happened for the first time. It deteriorated to the point where i forgot the most important and commonest things for a doctor. Medicine was prescribed and it helped me a lot.

Fastidiousness although didnt go away but somedays i managed not to clean my room (yes, this is exactly where u clap because not cleaning my room is an achievement for me)

OUTCOME: With medication and counselling most of my phobias are already gone. I DONT have fear of crowded places, fear of high buildings, fear of going outside anymore. I am COMPLETELY FREE FROM ALL OF THESE.

NOTE: After reading all of this a regular normal human is supposed to be crying by now :pp But while it seems hard to believe but i finally have something good to tell.

All the medication, counselling, constant attempts of getting rid of phobias and physical symptoms was focused on achieving a mutually decided and agreed upon short term goal of TAKING MY EXAM IN LONDON.

I was so well counselled about my travelling to UK and staying there in previous two months that i almost had NO ANXIETY OR ANTICIPATION regarding my tour to London (keep in mind i am human version of anxiety :p ), yeah but absolutely no anticipation of travelling. I took my flight and successfully managed myself and everything all the way to London Alhumdulillah (completely uneventful comfortable journey, no phobia). I reached there and stayed a few days before exam at my relative’s place without any difficulty. I managed to get along with everyone successfully (let me remind u that i happened to be VERY antisocial for last month). Stayed there like a nice decent human (lol). During this time various physical and mind symptoms came and they were READILY AND SUCCESSFULLY addressed with great concern. I had only regular genuine anxiety about exam (definitely not bothersome).

On the day of exam my brain returned from vacation Alhumdulillah :pp (I am trying to say that my brain DID NOT feel numb on the day of action). I was done with my exam without doing anything reckless. After my exam, I visited some famous places in London (during this time i had some minor physical symptoms for which again medicine was prescribed). Most importantly, i went from one building to another like a dis-inhibited, unstoppable retard and absolutely forgot that I had ANY PHOBIA (agoraphobia, social phobia, phobia of buildings). I didnt face ANY PHOBIA OR FEAR when i stayed outdoors. I met my friends without any difficulty. I stayed there for few days. On my way back to Pakistan i met OVERLY Frank strangers during flight who didnt bother me at all (although some of them were pretty annoying) and somehow i managed myself on my way back without being upset at all. (Plz clap for my consultant)

MOST IMPORTANT AND MOST FAVOURITE PART

I dont know how to thank you for your CONSTANT EFFORTS AND SINCERITY for treatment. Honestly i am still at loss of words for the energy u invested in me during the last one month. I used to deteriorate in hours and i was prescribed medicine on half hourly basis on some days. It takes a good deal of tolerance to try to understand the complaint of patient when the patient himself / herself is unable to understand his/her complaint but you did it so sooooo well and so BEAUTIFULLY. If i were my doctor i would have thrown myself out of window a long time ago (no kidding). Along with indicated medicine all the support and COUNSELLING regarding the planning of travelling to london prepared me so well for it. Most importantly all the difficult and challenging complaints were dealt head on without making me feel bad about it. By the grace of Allah I can give 100% CREDIT of this improvement and successful London tour to my consultant (Doctor Hussain Kaisrani – Bahria Homeopathic Consultancy). The constant efforts, the gifted ability of figuring out the problem and addressing it with GREAT COMMAND has inspired me a lot both as a doctor and as a patient. Like i always say you have taken my perspective of doctor-patient relationship to a whole new level. I seriously have no idea what should i write that would justify what u did for me as a consultant in the last month. It was undoubtedly one of the BEST decisions of my life and I cannot thank you enough for all the devotion, dedication, selflessness and commitment to treatment during this time (unique and comprehensive treatment by a really really unique consultant ). The flexibility of understanding the possibility of complaint (no matter how silly or stupis the complaint is) and willingness and readiness to solve it with absolute concern is priceless.I still remember all the tough days where admist all the difficult routine (ramzan, severe weather and busy schedule) my consultant (Dr Hussain Kaisrani Sahib) used to manage me (even at the time of aftaris and right after aftari). That is the kind of ability only few people are blessed with (to sacrifice your comfort for the sake of patient). I seriously dont want to imagine what would have happened otherwise. Another important aspect is management of acute symptoms on urgent basis. The OPENNESS to admit the facts when a certain medicine is not working and readiness to replace it with some other even more appropriate medicine and keeping the patient on same page with reassurance is an art few can master (cheers to best and top Homeopathic consultancy).

In a nutshell, no matter how much i write about THIS part no amount of words can do justice for what u did for me. I wish i become this compassionate for my own patients too someday.

BLESS YOU !!! and i wish there were a word bigger than THANK YOU to say thanks to you!

If interested to study more on this case, please use the following links:

REVIEW OF FIRST MONTH OF TREATMENT AND PROGRESS (MAY 2017)

For detail of case and homeopathic treatment process, Please click on following link: 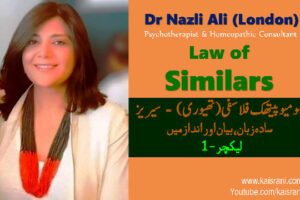 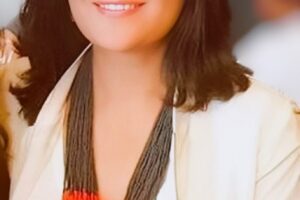 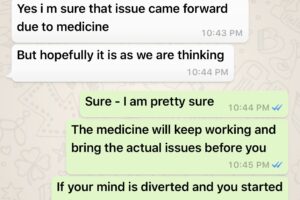 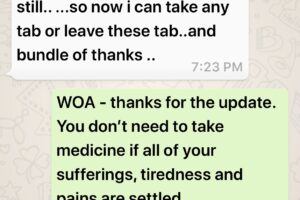 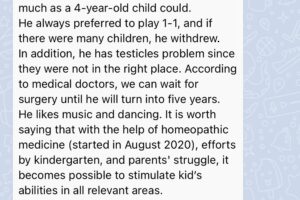 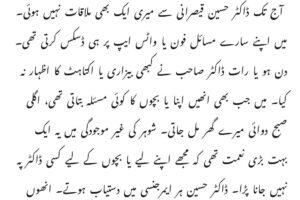 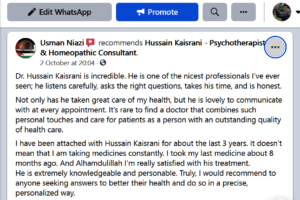 Usman Niazi Reviews about Hussain Kaisrani and His services